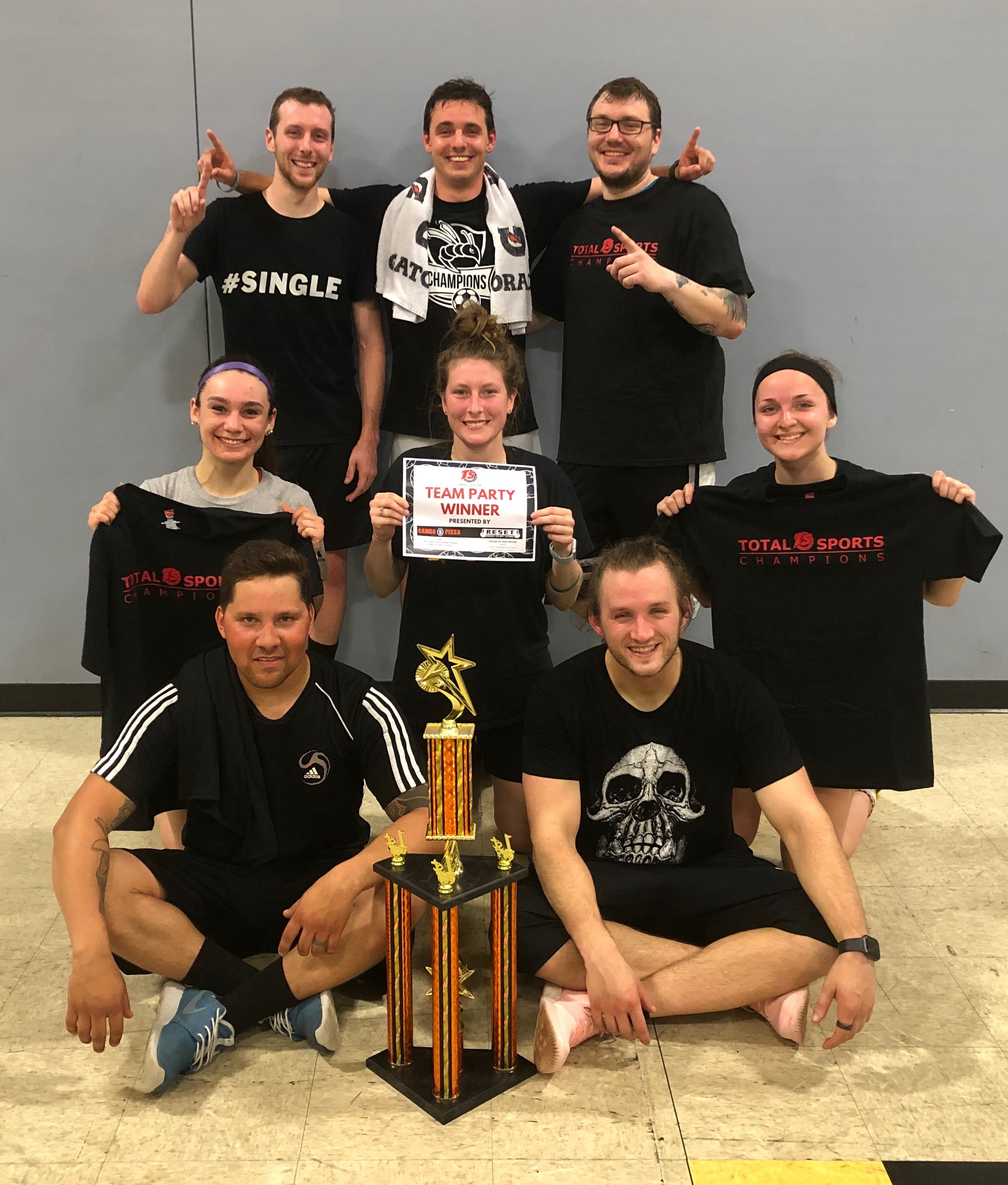 Our program helps develop a child’s social, emotional, and cognitive skills while providing physical exercise and developing players who are good sports and good teammates — on and off the soccer field.

What do we believe?

Got a Team?! Join our League! The leagues will begin Mar 28 and will include 8 games

We have both competitive and recreational divisions for you to choose from!
The season begins May 4th and teams must register by April 25th

Games played Sundays & Wednesdays at 9pm
6 games guaranteed, 2 30min halves, played in the dome
The top two teams play for a championship
$800/team – pay by the first game and save $50

EMAIL: Jguy@totalsportscomplex.com with any questions

The equipment of a player is a team uniform, shin guards, and indoor footwear (No Metal Spikes). Numbers are required on the back of all players’ shirts. No duplicate numbers are permitted. The goalkeeper shall wear colors that distinguish them from field players and the referee. Players shall not be permitted to wear necklaces, chains, earrings, or bracelets. Rings shall be removed. Any cast worn must be properly padded to satisfaction of the referee. Player will not be allowed to participate until their equipment meets the approval of the referee. A two-minute time penalty shall be assessed to the offender who enters the game having failed to carry out the equipment adjustment. Teams are required to have matching jerseys or t-shirts. The team listed first on the schedule, the home team, must change if there is a color conflict.

The equipment of a player is a team uniform (Matching Colored Shirts Ok), shin guards, and indoor footwear (No Metal Spikes). The goalkeeper shall wear colors that distinguish them from field players and the referee. Home team will be responsible for changing shirt if color matches that of the opposing team. Any cast worn must be properly padded to satisfaction of the referee. Player will not be allowed to participate until their equipment meets the approval of the referee. A two-minute time penalty shall be assessed to the offender who enters the game having failed to carry out the equipment adjustment. Teams are required to have matching jerseys or t-shirts. The team listed first on the schedule, the home team, must change if there is a color conflict.

Teams must submit official team roster to the office before the first game of the session. Player(s) may not be removed from the roster. A player may be added to the roster only by approval of the building administrator and done 48 hrs. prior to the game. Roster size is limited to 18 players per team. Players may play for two teams in each division. However, if a player plays on two teams, he/she must indicate which is his/her primary team for the game in which the two teams play each other. After a teams 4th game no players may be added.

All players must be registered and waiver signed before stepping on the field. Liability for this will rest with team representative.

A player used as a substitute can be added to a roster, but it must be done 48 hours prior to the game. After a teams fourth game, no players can be added to the roster. If a team has a player that is not on the roster, the team will have to forfeit the game regardless of the actual outcome.

All teams must have a rostered coach at each game. Three coaches may be rostered for each team. Coaches must be 21 years or older. A roster check may be done before each game in order to verify presence of coach and registered players.

There will be at least 2 females (may include the goalie) on the field at all times.

Games will be scheduled in 55 minute blocks which will consists of two 25 minute halves, with 3 minutes to warm up and a 2 minute half time.

Teams must sit in designated areas – Home or Away. The team listed first, which is home team on the schedule will have kick off. The team listed second shall have choices of ends. A goal may be scored directly from kick off.

The ball may be played in any direction on a kick off. The player kicking off may not touch the ball again until another player from either team has touched the ball.

After a goal has been scored, the game shall be restarted by a kick off by the team conceding the goal.

For restart in unusual circumstances, the game resumes with a kick from the location of the ball when play was stopped. The kick is taken by the team with possession at the time of stoppage. If no teams’ possession is clear, the game will be started by a drop ball at the point where the ball was when the game stopped. If the game is stopped inside the penalty box, the ball will be restarted from the top of the restraining arc.

Failure by a team to put the ball into play within five seconds as signaled by the referee, shall result in a possession turnover to the opponent.

During the game, substitutions can be made at any time on an unlimited basis provided the player substituted for is within one yard of the bench and does not interfere with the play at the time the replacing player enters the field of play. Immediately after a goal, substitutions may come directly onto the field.

Any teammate may change places with the goalkeeper at anytime as per regular substitution procedure provided that the goalkeeper wears a jersey that does not conflict with either the referee or the other players.

In any instance of a time penalty, the team will play short either two minutes or five minutes (yellow or red card).

The goalkeeper may not handle a ball that was intentionally passed back from a teammate. The restart penalty must be taken from the top of the arc. This is not a penalty kick.

Five Second Distribution: A goalkeeper in possession of the ball within the penalty area must put ball on floor within five seconds of having received the ball.

A goalkeeper who receives the ball with his feet outside the penalty area can not bring the ball back into his penalty area and handle it unless it has been touched by another player.

Goalkeeper may not handle the ball outside of penalty area. If the ball is completely out of the penalty area, a free kick will be given.

A goalkeeper is considered to be in control of the ball when:

The referee(s) power of penalizing extends to offenses committed when play has been temporarily suspended or when the ball is out of play. Referee(s) decisions on point of fact connected with play is final.

The referee has the following responsibilities:

Ball in & Out of Play

The ball is in play at all times unless indicated by the referee.

The ball will be returned to play by a throw in, corner kick, or goal kick.

The ball is out of play:

The ball will be returned to play by a free kick at the point the ball left the field of play. The ball may be move two feet from the wall to return to play.

The ball is out of play:

All goals scored the team will receive one point.

For goals scored inside the defending team’s third of the field (inside or touching white line) the team will receive one point.

For goals scored outside the defending third of the field (outside of the white line) the team will receive two points. The shot on goal must be unassisted if a goal is scored from a kick-off, at the start of a game or after a goal is scored, it will count as a two point goal.

When a team has a five goal advantage, the opposing team may add a player to the field.

All ties will stand with the exception of championship games. If at the conclusion of regular time, teams are tied, a shoot out will begin with the home team and continue until the tie is broken.

A player who commits any of the following offenses while the ball is in play shall be penalized by the referee rewarding a free direct kick to the opposing team at the point of the foul unless the foul occurs in the penalty box, then the ball will be placed on the top of the penalty arc.

Time penalties may be given against players for committing any of the offenses listed in the penalty definition. These penalties shall be administered by showing of a YELLOW OR RED CARD BY THE REFEREE.

A two minute penalty will be given to the team when they have accumulated three penalties during the game. The team will play short during this time. Any player who is playing and is not in proper uniform will receive a yellow card. If the coach should come onto the field without permission from the referee, a two minute penalty will be assessed to a player on the same team.

A player or non player shall be ejected for incidents of:

An ejected coach may not, from the time of his ejection until the conclusion of the game, have any communication with the team’s players in the arena. The game will be forfeited unless there is another rostered coach present.

In a situation where the referee would want to penalize a player for an infraction by issuing a time penalty, where advantage rule applies, the referee shall acknowledge the foul by raising one arm straight up in the air maintaining that signal until such a time as:

If a red card is issued, that player is suspended for the next two games with any team he/she is rostered on.

When play has been stopped for an infraction, play shall be started with a free kick taken by a player from the opposing team. During the taking of the free kick, all of the opposing players must stand at least ten feet from the ball until it is in play. The ball must be stationary when a free kick is taken and the kicker has five seconds to play the ball. Failure to put the ball in play will result in the ball being turned over to the opposing team.

Free Kick In Attacking Penalty Area: Any free kick awarded to the attacking team for a foul which occurred in the opponents’ penalty area, shall be taken at the top of the penalty area arc, unless a penalty kick has been awarded.

Free Kicks Originating In The Penalty Area: When a player is taking a free kick in his own team’s penalty area, all opposing players shall remain outside the penalty area until the all has cleared the penalty area, and shall be at least 10 feet from the ball while the kick is being taken.

If the kicker, after taking the free kick, plays the ball a second time before it has been touched by another player, a free kick shall be taken by a player on the opposing team at the point where the second touch took place.

Total Sports will always try to make accommodations for specific scheduling requests. Schedule requests must be submitted in writing to soccer@totalsportsrossford.com prior to the league registration deadline. After the registration deadline Total Sports will attempt to make accommodations within reason. Games will only be moved with approval of both team captains/managers and are not guaranteed.

We take all complaints and compliments very seriously. All Referee feedback is greatly appreciated and we encourage you to let us know how they are doing. In order of these to be process all comments must be submitted in writing and can be dont so through our online survey HERE. 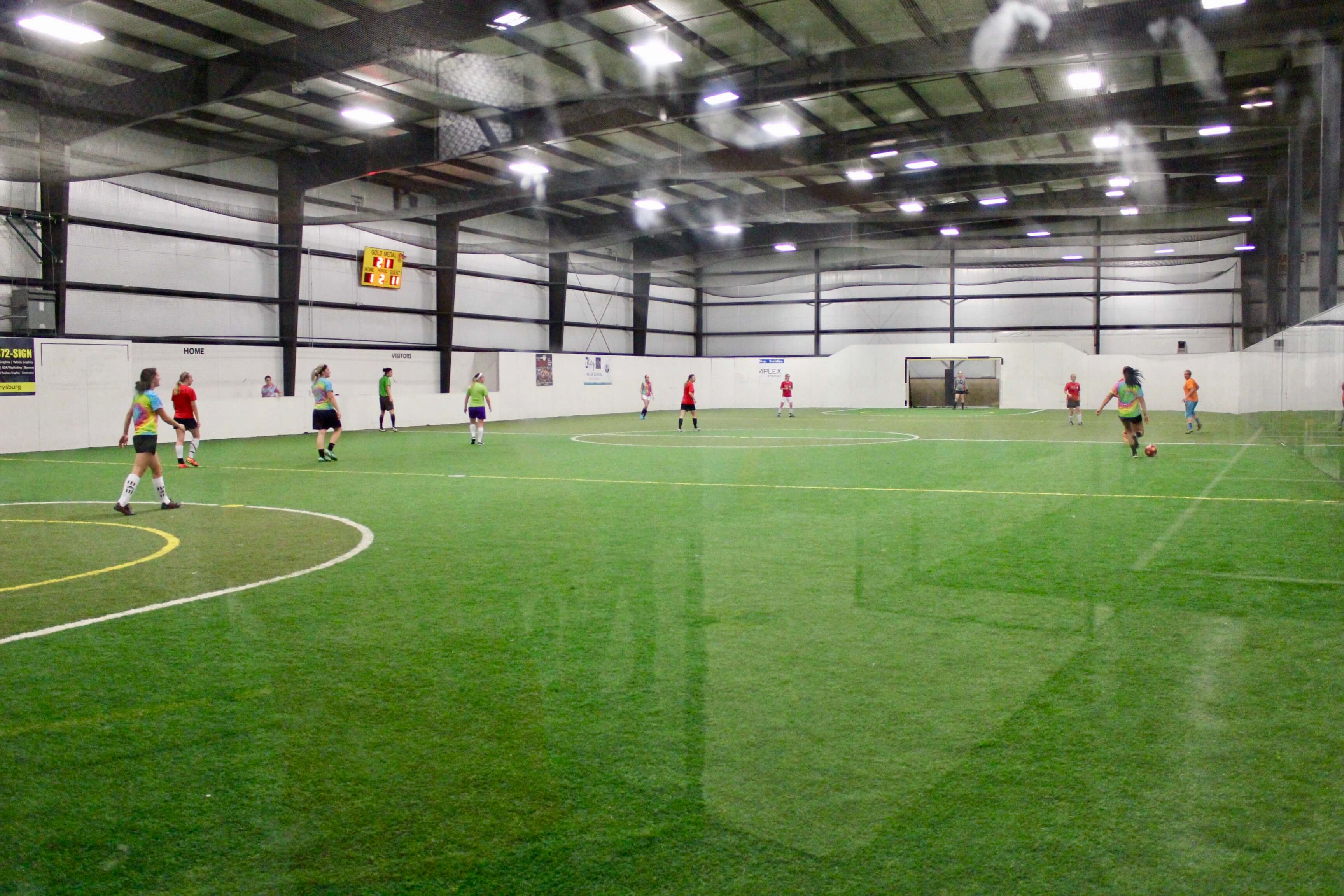 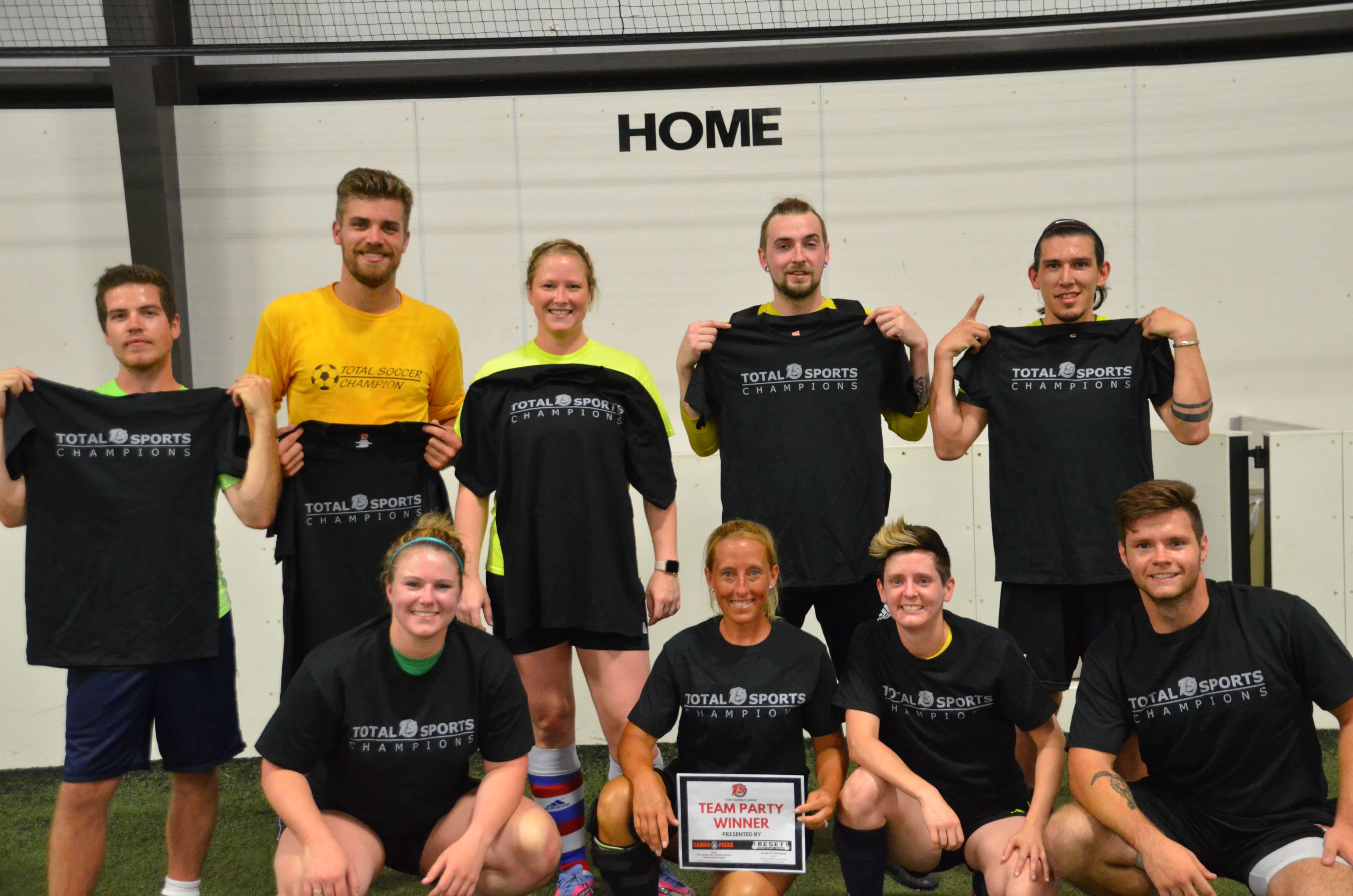 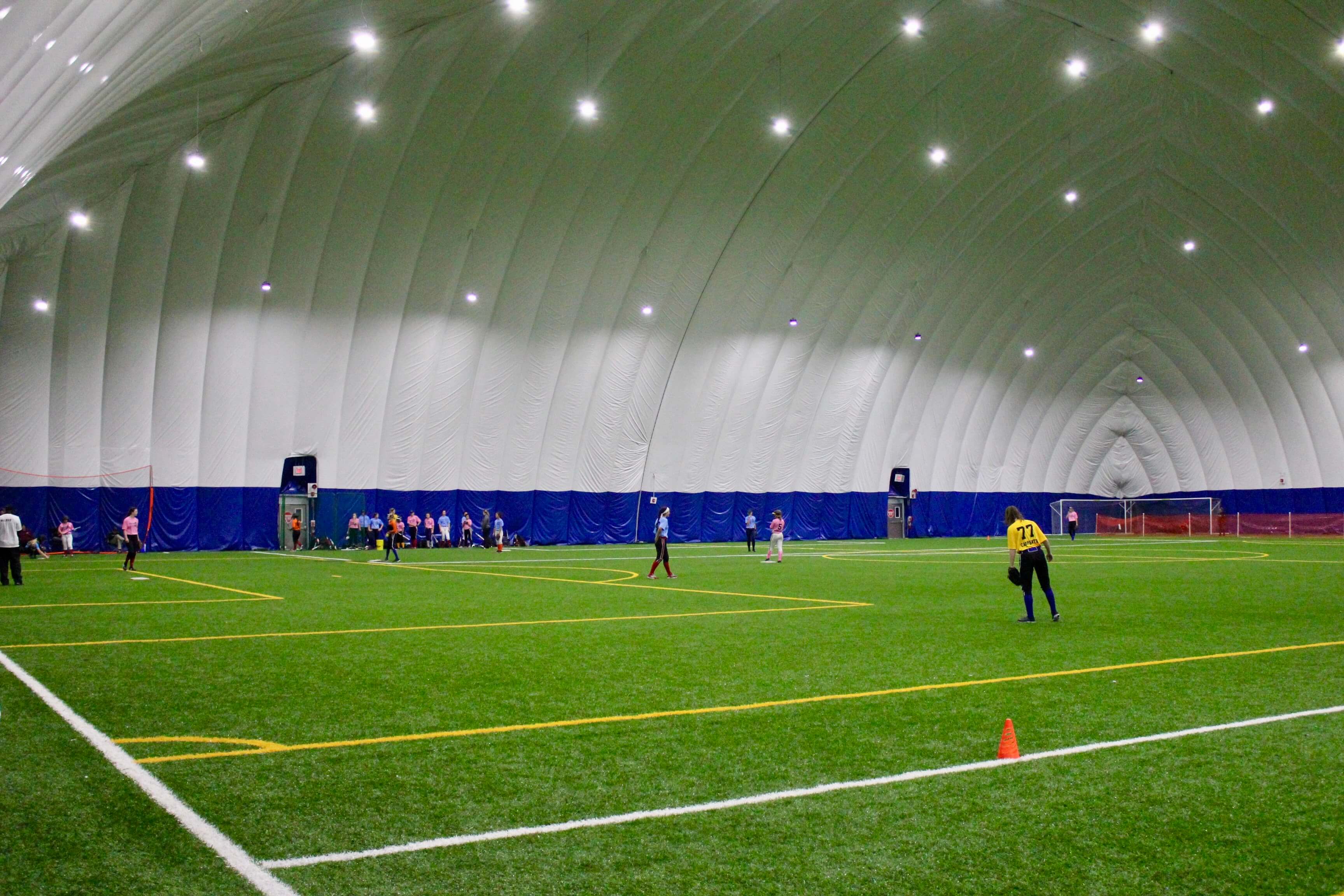